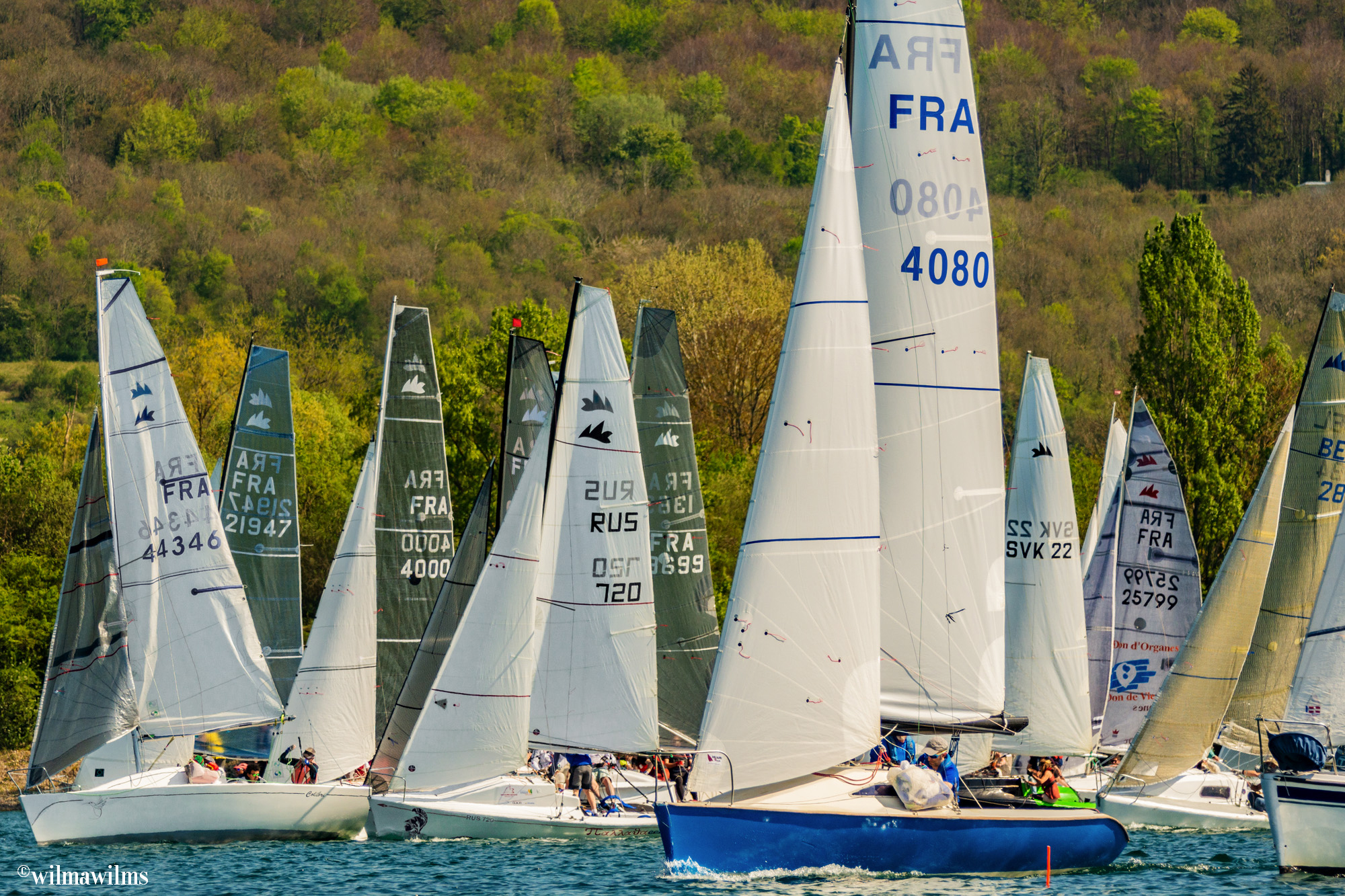 Since 2013, it was difficult to attract European crews to the Euro Micro in France. In the same way, the French boats were not coming to the Ile de France region, as the river Seine is difficult.

But the 2019 edition showed that thins can be turned around.

The AS Mantaise, under the leadership of Bruno Cirou, demonstrated great efficiency and welcoming talents.

And Bruno, had been plying for months TDF Micro regattas to invite the competitors on the water to join this beautiful meeting for the opening season.

On Friday evening , the crews meet by the water to prepare the boats and enjoy the first evening. A long evening begins with a few kegs of beers, with story tellings about the winter months, the boat preparations etc. Later in the evening, motivated by the weekend ahead, everyone tacking back to their rooms in the facilities of Ile des Loisirs Boucles de Seine.

Saturday morning, no wind on the lake, but the Sun is waiting for us to prepare the boats and launch them.
The race committee gathers the participants to organize the races, and collects the expectations of the Organizing Club and the Micro class.

From 11am, the wind is arriving on the lake and a nice breeze finally gets up and rises to about 10 knots.
From 13:00, the bouys are set and everyone can test the race area.

13:59, first preparatory signal warning. We leave for two up and downs round the cans races with a dream weather and some localized breezes change the pre-established ranking. Speedy is first upwind, followed by Pallada, Hurle-Vent, and El Diablo, who emerges from the other side thanks to a lifting wind as the buoy is slightly sheltered by the bank trees.
But already, the tailwind section is decisive.

Upon leaving the Dog Leg, it was essential to find the first breeze to get out of the weaker wind zone.  The first tailwind reshuffles the ranking and Speedy is caught by her three pursuers.

Hurle-Vent, with her excellent speed, takes off after the buoy, leaving her three competitors to make bad choices between themselves for one lap, and failing to break through to the finish.
Speedy tries to slip between El Diablo and Pallada at the finish line, but not to mention that his competitors would not give him the room and get a DSQ on the line, leaving 4th place for Go-Fast.

The 38 minutes of the first race put the competitors racing mode. But no question of breaking for a long time, just the time to reset the buoys in the axis of the wind, the wind having turned a little to the right.

14:59, second preparatory signal warning. This time, Pallada flies alone in the lead and Liberty takes a good option on the right, followed by Speedy and Hurle-Vent. It was at in tailwind section that Hurle-Vent came out of the game again and Liberté locked herself at the edge of the water with little wind, leaving Speedy third after 38 minutes race.
The committee then extends the race to get closer to the target time.

The third race begins with a general recall, directly sanctioned by a black flag.

4:13 pm, the third race is starting, everyone being careful. This time it is Liberty II which benefited from the best upwind. The wind is at its strongest with a few gusts of fifteen knots that destabilizes the less trained. Indeed, AS Mantaise and CV Dennemont had gathered a maximum of crews taking care of the boat balance.
But the battle takes shape between El Diablo, Hurle-Vent, followed by Speedy and Liberty II. Escaping with speed and good downwind options, Hurle-Vent ends up well ahead in 42 minutes.

5:14 pm, fourth P preparatory signal warning. The committee is right to trust us for the departure, especially as the wind softens at this moment. It was then Pallada who flew again, followed by El Diablo, Liberty and Speedy. Hurle-Wind, stuck at the start, began going back up the rankings with the good downwind options, going left towards the 2 towers while the option had not proven a good one so far. Some clashes at the buoy passages will deserve an explanation around a beer.
El Diablo finished 2nd behind Pallada first, followed by Hurle-Vent, Liberty and Speedy.
The wind starting to show some weaknesses on this 44 minutes race, the committee send back the competitors on shore while waiting for the last ones.

The podium seems already pre-established with the regularity of the first two Proto l’Arté, but just behind it leaves the games open and tight for the next day for the 3rd step on the podium.

A good beer is needed, well deserved after a sunny and windy day. Lots of discussions around whether the right side or the left side of the water was best.

A quick shower, then time for food and drinks. Menu of BBQ meat, wheel of Brie de Meaux cheese, various salads, and drinks from many different places.
The crews leave quite early in the evening, tired of their day on the water.

Same weather as the day before – waking up to a no wind situation. The locals people feel confident the wind will be there for 11 am.
The committee puts a A on shore and sends the boat on the water

1/2 hour to go round the lake, we find the same wind direction as yesterday afternoon.

At 11:58, first preparatory signal warning for the 5th race – 38 minutes. Liberty takes the right side.  Downwind, jibe at the bouy is a must to move away from the lack of wind on the dog leg. Hurle-Vent manages to distance the competitors with the succession of jibes. Speedy takes the 2nd place from Liberté.

12:55, 6th round for 43 minutes. The wind shifts left during the departure. Pallada, Liberté and El Diablo fight each other for the lead..
The wind starts to show weaknesses, the course is slightly shortened and shifted to the right to stay in the wind axis.

For the 7th race, a wind shift disrupts the first start and there is general recall, followed by a second procedure under P. The battle is happening by the committee boat and a second general recall this time will cause a black flag. The start is given at 14:14, 7th round of 38 minutes of race.
Here, El Diablo arrives first up wind. Liberty II intercalates an extra point between Pallada and Hurle-Vent, and now the first place is known.
The buoy upwind is moved a bit to adapt to 5-10 knots wind.

8th round at 3:13 pm for 36 minutes of race. Alisa, a Go Neptune, goes all the way to the left and comes out first up wind.  Tyrex comes out first of the right option, followed by Speedy, Pallada who stayed centered.
Tyrex jibes first to protect his right and leaves his competitors with the left. Far behind, Hurle-Vent and finds himself in the middle of the Regatta and Cruisers, but emerges quickly with the jibe on the Dog Leg. 8 minutes later, Tyrex is leading downwind, followed by Hurle-Vent and Pallada who has crossed the lake to get out of the no wind area.

9th round at 4.27 for 36 minutes of race. The wind is lighter and the course is shortened. Elisa starts on the buoy side and finds herself in the lead. Pallada is first up wind. Liberty, Speedy, Go-Fast and Hurle-Vent are just behind.
A Dog leg jibe again, Hurle-Vent definitely takes the lead in front of Go-Fast, Liberty and Speedy.

The wind becoming too light this is the end of day 2 and the start of beer time and the official cocktail paid by the Club of AS Mantaise.

Petits fours, Ti punch, Bouchees a la Reine (French delicacies), Peking duck, Brie and apple pie, the club has provided us with a real communion meal on this Easter week-end. Then Max and the Kumpelkettes orchestra calls everyone to the dance floor until around midnight.

The crews are now used to the 8 am breakfast. Good time to greet Paule-Marie, Race Committee and Regis, responsible for the nautical center.

The weather forecasts are all different depending on the model, but none of them give any hope for wind. Crews take the opportunity to work on their boats or chat.

11:30, it’s the end, we can tid. Everyone is happy of the weekend, the time spent on the water, but also on shore.

14:30, the awards ceremony . It is very hot and stormy.
Everyone gets a polo of the competition, and some small accessories useful for navigation (measuring strips, …). The foreigners also get some local dishes, to show them our gastronomic heritage. And finally, the big draw with a voucher of 400 € at Huari Voile sailing specialist Micro, and a vacuum cleaner, …
The party ends with petits fours and the traditional group photo of Wilma Wilms.

It’s time for goodbye and thanks and debriefing with AS Mantaise.

Congratulations and thank you to Bruno. Also a big congratulation to Patrick, president of the Club, who knows how to organize and pamper each one.
And all of the club’s volunteers, the Somnium sailing team and the Somniumettes who made us feel at home when they were not in their own club.
We also enjoyed a very good welcome on the base, and in particular by the members of the nautical center with Régis
Thanks also to the support of the club of Dennemont
And this festival was perfectly punctuated by Paule-Marie, the Race Committee, both on the ground to send us at the right time and its explanations, on the water, for having chained cleanly 9 rounds in 10 hours in fairly variable conditions.

Thanks to the photographers Wilma Wilms, Régis Saintier and Nat Benhatta.